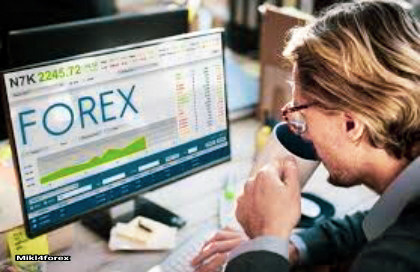 Forex trading, trading is the thing that occupies the thinking of many people, as trading is now spread in a wider way than it was in the past, and all thanks to the technology that has come to dominate the world and made the world a small village, when we talk about trading and forex we must mention that The daily volume of forex trading reaches 5 trillion US dollars, and this is not an easy matter. In addition, there are many entities and bodies that trade in forex, in addition to these bodies, central banks and commercial banks, because forex has become the most powerful electronic trade in the world, because it is a business To help everyone participate in it with ease, we will now learn other details about forex trading.

We mentioned at the beginning that the average income traded in forex daily reaches 5 trillion US dollars and that there are many international and governmental bodies and banks that trade in forex, but there is a question that concerns many people, which is why all these bodies trade in forex? The answer is simply that the forex market provides all the ways for customers who deal with it, as everyone can trade all over the world with ease and ease because the forex market is not linked to a specific site but is available to everyone and this was the first point, the second point and considered the most important is that the market Forex operates 24 hours a day from Monday to Friday evening and trading is open all this time because it starts in New Zealand and ends in the USA.

There are a lot of currencies and pairs that can be traded, but there are currency pairs that are the most popular around the world, for example the EUR/USD. The method of writing this currency pair is not a random method, the currency on the left is the base currency, while the currency on the right is called the secondary currency and the secondary currency is the currency used to make the transaction. Each currency pair has two prices, the first price is the selling price The second price is the purchase price. There is a difference between the selling price and the buying price between currency pairs. This difference is called the spread, and it is considered the amount that the broker obtains in order to open the trading position. It must be noted that the higher the liquidity ratio, the lower the price differences. Displaying prices by 4 numbers after the point, for example, 1.2355 USD, so the change in the price is in the fourth column after the point. It should also be noted that in the forex market, gains or losses are calculated in the form of points.

There are a lot of terms that are found in the forex market, one of the terms that most trade on the tongues of people is the term short-term purchase, which is a process of buying and selling respectively, there is also a frequently traded term, which is the bull market and the bear market, some believe that this term It applies when the market is rising and this is wrong. This term applies to the direction of the market, whether the trend of the forex market is up or down, traders in the market use their strategies if the market is up or down, which makes them achieve Lots of profits by doing technical analysis and other things.

What is Forex Exchanging?